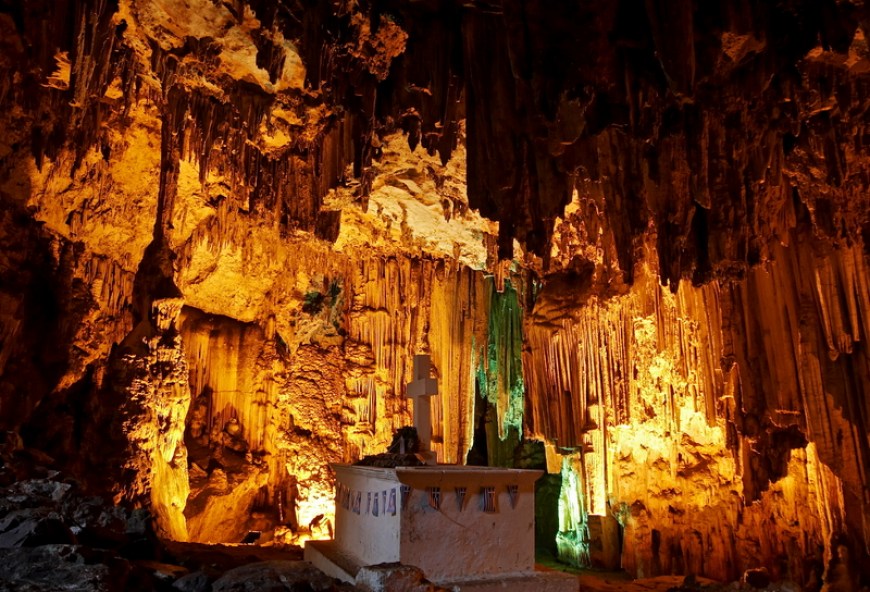 Tucked into the rocks of south base of Kouloukonas Mountain, a short way out of Melidoni village (6 km south east of Panormos) is the entrance to Gerondospilio. A place of great natural beauty, the cave played a part and is associated to the rising against Ottoman presence in Crete. The cave served as a settlement and place of worship from the late Neolithic era to Roman times.

Melidoni Cave or Gerontospilios (The Old Cave) is just a few kilometers away from Panormo Village, just outside the Village of Melidoni, at an altitude of 220m. Both the Village of Melidoni and the Cave were named after Antonios Melidonis, one of the protagonists of the rebellion against the Turkish Domination.

Melidoni Cave is of great archaeological importance, as suggested by the rare finding recovered from it (they are exhibited in the Archeological Museum of Rethymno). Among the findings is a double copper axe dating back to the prehistoric period. During the Roman period, the Cave was used as a sanctuary of “Taleos Hermes”. It was actually a sacred site, as it was situated on the “crossroad” connecting three great ancient cities, Axos, Eleftherna and Grivilon.

The history of the Cave is also very important, as it played a rather tragic role in the Cretan revolution against the Turks, in 1824: during the revolution, some 250 unarmed villagers, including women and children were suffocated when the entrance was “sealed” by fires lit by the Turks, following a three month siege. Not until 1834, when the English explorer Robert Pashley visited Melidoni, did Manolis Kirmizakis, the only survivor of the events, inspect the cave discovering the bones of the martyrs. A small chapel is built in the entrance of the cave where the victims are commemorated every year.