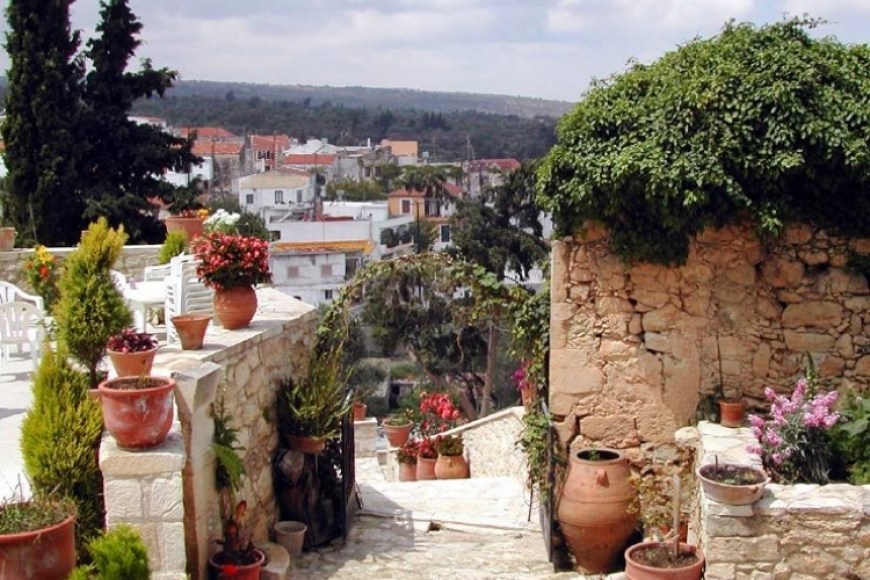 Traditionally know for its clay urns - pitharia and terracotta making Margarites is a small beautiful village at only 9 km south of Panormos. In its picturesque narrow streets you will find a number of byzantine churches, decorated entrances and walls built during the occupation by Venice as well as numerous workshops and terracotta outlets.

Margarites village is built between two gorges of exceptional beauty, at an altitude of 300 m,
next to ancient Eleftherna, at an approximate distance of 14 km from Panormo.

It is known as the village of pottery, since pottery tradition is evident in its every corner
and puts Margarites among the largest pottery centers in Greece. At least 16 ceramics
workshops-showrooms deal with both modern and traditional construction methods.
First mention of Margaretans’ pottery work was made by american traveler
Richard Popocke who traveled to Central and Western Crete in 1739.

The settlement flourished as early as the end of Byzantine Empire and the beginning of
Venetian occupation.
The architecture of the village in Venetian and Byzantine buildings, restored churches
and houses with wooden carved doors, is the result of mixing Byzantine tradition, Western
Renaissance and Cretan idiosyncrasy.

On the way to Margarites, as you leave Perama, one of the most important monuments of
Rethymno is the Late Minoan vaulted tomb dating back to 1350 BC where bones of four adults
and two children were discovered.

Arriving at Margarites, visitors have the opportunity to take a stroll through the green landscape,
through gorges full of vegetation consisting mainly of huge cypress trees, in the streets
where large clay pots called “Margarita pitches” can be seen outside each house, along with jars that decorate flowered gardens and ceramics hung on the walls.

Visitors can closely watch craftsmen in the creation of ceramics, seeing how clay, today’s trademark of Margarites because of rich alluvial deposits in the area, is molded into objects.
Finally, visitors can enjoy the special flavors of Cretan cuisine, combined with fresh, breezy raki or local wine, surrounded by the view of the evergreen nature.