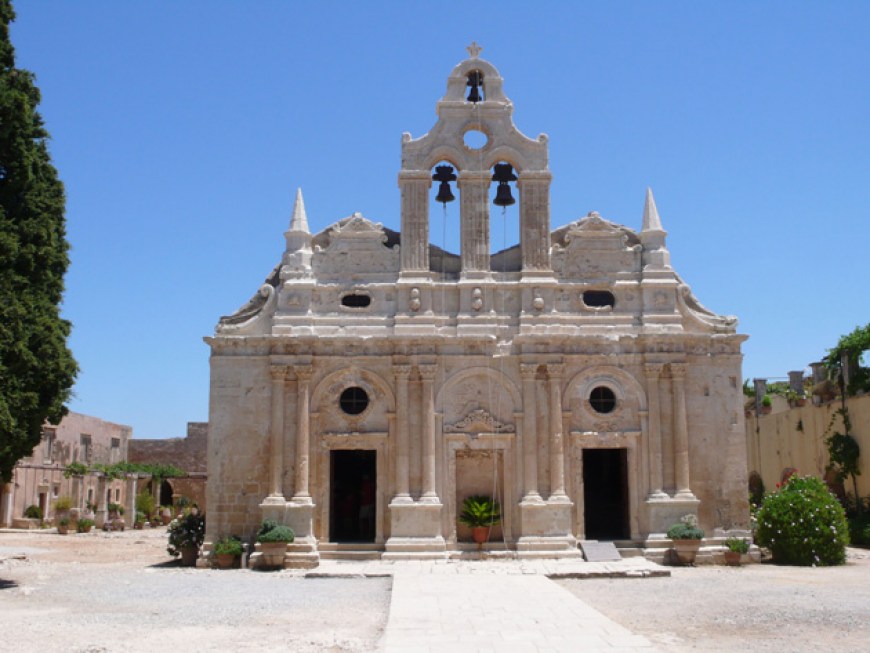 Arkadi is known for a siege that took place during the strife of Crete against Turkish occupation in 1866. Its architecture adds to the site’s attraction while the small museum contains a significant display of icons of the late C17 besides church archives. The monastery is 14 km southwest of Panormos.

The Holy Abbey of Arkadi is probably the most historic Abbey in Crete. It is argued that it was named after Byzantine Emperor Arkadios. It is built in a strategic location, on a fertile plateau of Mountain Idi (Psiloritis).

In November 8th 1866, this Abbey saw Crete’s greatest sacrifice for freedom against the 250-year Turkish Domination. Almost 1.500 warriors from all over Crete engaged in a bloody fight against 15.000 Turks, who were decided to end the Greek Revolution at once. When the Greek defense broke and the leader of the Abbey, Abbot Gabriel, was killed, Cretans retreated in the gunpowder-keg. Captivity being the only alternative, Konstantinos Giampoudakis from Adele Village, lit the gunpowder, killing hundreds of Greeks and Turks. Among the Greeks, there were more than 500 women and children. It is said that the bang was heard to Heraklion.

The Cretans kept fighting for one more day and then surrendered in exchange for their lives. The next day, they were all executed.

With its sacrifice, Arkadi Abbey raised the claim for Cretan freedom and gave rise to the philhellenic feelings of Europe.

The Abbey was completely rebuilt after its destruction. Today, the only thing that reminds us the bravery of Giampoudakis and the warriors who died on his side is a cannon ball wedged in the age-old cypress on the right side of the church.